We have a cute Renault Zoe EV, called Evie as it happens, and when I get a chance at traffic lights I slip it into non-ECO mode so I can leave all the hotshot BMWs / Audis / Mercedes and Jaguars in the dust as I zoom away (within the speed limit of course :-) ) !

EV Intentionality is about driving and thinking EV in such a way as to convey the genuine benefits of the technology. They're the rapidly approaching future (fuel cell cars aren't) and we're in competition with the Fossil Fuel industry who are orders of magnitude bigger than us (until their stranded assets catch up with them ;-) ).

Friends frequently ask me if it's better to (a) buy an EV now, (b) buy a hybrid or (c) drive their current car into the ground. (c) Seems like common sense, but actually it's worse for the environment and your pocket. This is why (assumes average ICE car driving 12703Km/year at 120g/Km): 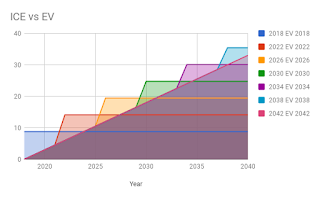 The way to look at it is to add up your emissions over the long-term. Put simply, buying an EV involves a one-time emissions hit (the production of the car, including the extraction of its raw materials) and after that, it can be emissions-free. This assumes you'll charge it on renewable energy, because we do.

Therefore every fossil fuel mile you add now, adds to your final emissions. By 2040, the EV bought in 2018 still has the same emissions, but the one bought in 2022, just 4 years later resulted in another 60% emissions and the one kept going until 2040 resulted in nearly 4x the emissions - before the EV was eventually bought).

Let's consider what happens if you buy a Hybrid (at 100g/Km) or a Plug-in Hybrid (PHEV) (at 45g/Km) or an EV vs driving the same ICE car for as long as possible: 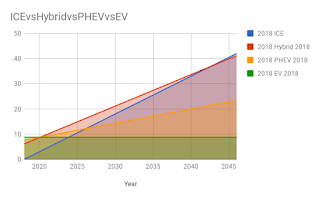 From an intentional viewpoint though we want to promote the transformation of transport. Consider:


And given there seems to be at least one car advert on every commercial break on TV, we're going to have to be 100% intentional for the foreseeable future :-) !