In the run-up to the UK General Election 2015, I ended up writing so many similar posts on facebook on why Austerity doesn't work that I thought I'd turn it into a blog entry.

Nobel Prize-winning economist Paul Krugman has written an excellent piece in the Guardian about the Austerity delusion. He covers the historical developments over the past 5 years and provides evidence for a negative correlation between austerity and economic growth.

All I want to do is show why the common-sense argument of the analogy from thrift isn't correct.

The thrift argument is that, if I'm in debt, I have to cut back on my own spending until everything's under control and I can (and have) paid it off.

[*]And that's the right thing to do, however, it's not the whole story. In reality what happens is that when you cut back to pay off your debt, the people you trade with lose income. In a sense, they're soaking up the imbalance of your finances, but it works, because they're only losing a little bit when you cut back by a lot. The key thing is that your income stays the same while your outgoings shrink (a lot), and their income shrinks (a bit) while their outgoings stay the same - so you're passing on your debt, they take a bit of a hit too. 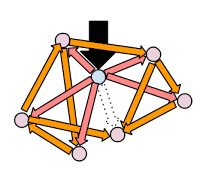 And therefore, it won't work if everyone is simultaneously in debt. When everyone starts cutting back, everyone's income shrinks and so they become less able to repay their debts. That's what happens when governments enact austerity: the private purse shrinks, internal trade stalls (and this in fact is what happened - banks stopped lending and started calling in debts, which is why businesses failed) and if the government acts along with it by reducing its spending in accordance with its lower tax revenue, it just adds to the problem.

The right thing to do then, if private lenders won't lend, is for the government to provide the cash to keep the economy going - and that means public borrowing during a financial crisis. That's half of Keynesianism, in essence.

Keynesianism, relies on another insight - that cash isn't a substitute for goods as we normally think, instead, cash is a medium for exchange. That is, cash operates as a pipe for transporting goods; the size of the pipe is the amount of cash we have, it determines the rate we can exchange and trade; it's not a representation of what we have.

So, if we go back to [*], we can see that's what's happening in the example. Your original debt is distributed across the entire system. It's the capacity of your input pipes (income+loans), which is the same as your output pipes capacity (spending), which determines the sizes of others' input pipes (income). When you cut back, the whole network capacity shrinks. Which is to say your debt was distributed everywhere all along. It's a really powerful concept to get one's head around, I've barely scratched the surface.
Posted by Snial at 12:38 No comments: