uxForth: Unexpanded forth for a standard VIC-20. Part 2, the inner interpreter.

I'm the developer of the DIY 8-bit computer FIGnition, but it doesn't mean I'm not interested in other retro computers and the idea of developing a minimal Forth for the ancient, but cute Commodore VIC-20 is irresistable!

In the first part I talked about the appeal of the VIC-20 and how much usable RAM I thought I could squeeze out of it.

That turned out to be between 3947 bytes and 4646 bytes depending on whether we count the screen and the CPU stack. And this sounded more credible, except that I want at least 1Kb of RAM for user programs which brings me back to 2923 to 3622 bytes. A terrible squeeze after all.

There's one obvious way to tackle that: use the Token Forth model. A definitive articles covering all the trade-offs with developing Forth are in the series "Moving Forth" by Brad Rodriguez, but here, we just need to recap on the most popular Forth models.

Forth normally represents its programs as lists of addresses which eventually point to machine code. The mechanism is handled by the inner Forth interpreter called "Next". The traditional Forth model implements what's called Indirect Threaded Code. 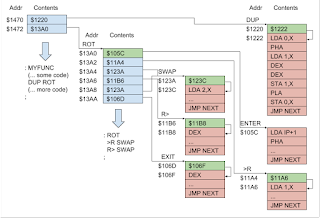 The next Forth model to consider is Direct Threaded Code. Here's the same thing: 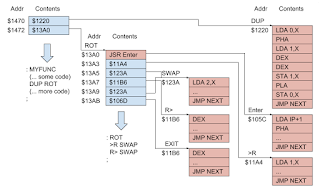 Here, every forth command (in blue) points directly to machine code (in pink). Primitive commands are executed directly, but commands written in Forth itself (like ROT) start with a "JSR Enter" machine code instruction which saves the return address (to Forth code) on the normal stack and in the DTC Forth, this return address is used as the new Forth Instruction Pointer after pushing the old IP. We can see that DTC will normally be faster than ITC because there's less indirection.

Token Threaded Forth is essentially a byte-coded Forth, except that in the case of commands written in Forth itself, the NEXT routine uses the top bit of the token to denote an address. Thus, only a maximum of 128 tokens can be supported and only 32Kb of Forth code. 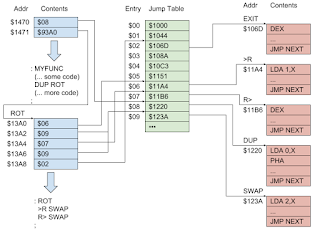 In this example, we can see that the Forth code has been reduced from 14 bytes to 8b, but there is a jump table of addresses which is the same size as the indirect entries in ITC (10b used for these entries). DTC used an additional JSR (3 bytes) for the ':' defined word, but TTC didn't need any extra bytes for the ':' definition (it uses a single bit, encoded in the $93A0 address). Here, the overhead of ITC weighs in at 24 bytes, TTC weighs in at 18 bytes and DTC weighs in at 17 bytes.

We can see that TTC could significantly reduce the size of Forth code if the forth tokens are used often enough, but traditionally a byte-coded interpreter is slower than a threaded code interpreter. uxForth won't beat a DTC Forth, so the question is whether it can compete with an ITC Forth.

This is the implementation from the original 6502 FIG Forth. It uses zero-page for IP and W. The indirection is achieved by jumping to an indirect Jump.  It requires 41 cycles.

This is a simple derivation from the original 6502 FIG Forth. As before it uses zero-page for IP and W. The indirection is achieved using a simple indirection.  It requires 36 cycles.

This is the proposed UxForth implementation. The UxForth version has to handle both multiplying the token by 2 to get the index for the jump table (gVecs) and testing to see if it's a call to another Forth routine (bcc Enter). It requires 22 cycles, so we can see that it's almost twice as fast as the ITC version. This is because it has one natural advantage and uses several techniques to improve the speed:

18b vs 26b for ITC Forth and 25b for DTC forth. It's possible to use most of these techniques to improve the speed of ITC and DTC 6502 Forth, but I'm not so concerned about that, because the easiest to access VIC-20 Forth is the Datatronic Forth (which is an 8Kb ROM cartridge) and Datatronic Forth uses exactly the same version of NEXT as FIG-Forth. 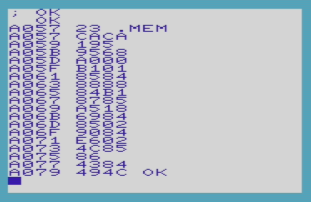 RAM is still very tight, but we can reduce its usage by implementing a byte-coded Forth and we should find it's perhaps up to twice as fast as a traditional FIG-FORTH implementation.

In the next post we'll look at how we might map our Forth implementation to the available RAM regions!
Posted by Snial at 13:16 No comments:

Labels: 6502, Datatronic Forth, dtc forth, itc forth, Moving forth, token forth, VIC-20

uxForth: Unexpanded Forth For A Standard VIC-20

I'm the developer of the DIY 8-bit computer FIGnition, but it doesn't mean I'm not interested in other retro computers and as far as it goes, the Commodore VIC-20 is one of the cutest to come out of the 1980 stables.

The VIC-20 was cute, because it had a combination of fun and dumb features. Like: a full quality 65 key keyboard - and only two cursor keys!

Or the ability to support business applications with a floppy disk drive, but only having 23 column text. Or multi-colour graphics (and even a 2-bit per pixel mode that can co-exist with a 1-bit per pixel mode) with a near complete lack of support for bitmapped graphics. Or it's 16Kb of ROM and only 5Kb of RAM (with just 3582bytes free when Basic boots).

So, the fun challenge here is to see how much of a Forth I can squeeze into the Basic, unexpanded VIC-20 given the RAM limitations. I'm pretty confident I can do this, given that a super-tiny Forth subset has been crammed into just 1Kb of 8086 code (itsy Forth). I'm aiming for something that's kinda more usable.

The first step (and this is the topic of this blog) is to find out how much RAM we can really use. A VIC-20 boots up and proudly displays:

But it actually has 5Kb, so where has that other 1.5Kb gone? Armed with a detailed VIC-20 memory map we can see that areas of the first 1Kb have been nicked by Basic and the Kernal, which is a set of OS services abstracted from Basic and forms part of the ROM. For our purposes we don't want to use Basic, but we do want to use the Kernal, so we can read the keyboard, display to the screen and input/output between peripherals. For some of this 1Kb it's obvious which is used by Basic, but not all. So, here I decided to use the VIC-20 ROM disassembly. I first worked out that the Kernal starts at the address $E475, or thereabouts by observing that the rest of that code doesn't reference Basic. So, then I looked up all the system variables used by that section of code and found this set of addresses:

I also searched the Kernal code to find references to addresses within the Basic part of the ROM and found none, which meant that Basic sits properly on top of the Kernal. So, this tells us what areas of RAM we can use and it's as follows:

In the next part we'll make some basic decisions about the uxForth model, this will help us decide how to use all these areas.
Posted by Snial at 22:52 1 comment:

A recent Guardian article nails it. We've already hit >1ºC of warming, so it's virtually impossible to stay under 1.5ºC despite the fact that the Paris Climate Agreement in December 2015 stated it as a goal.

There's an interesting incidental quote in the article:

Indeed, that's where it must lead and the realisation that infernal combustion engines are going to have to be phased out rather more quickly is going to dawn on us pretty soon. For example, if we want to have 0 fossil fuel cars on the road by 2050, then we have to stop making them by 2025. Norway, India and the Netherlands are already considering this.

So what this article is saying - if it doesn't mean merely ending production - is that we should already have stopped building fossil fuel cars in 2005, which means they'll be forcibly taken off the road. The fact that cities like Paris ban odd or even numbered vehicles on high pollution days is an indication of how this might take place, but whatever, they have to go and go quickly.

Yet, and this is a big yet - we are still glorifying cars in every advertising space possible: on TV in virtually every commercial break; on billboards, in papers, on facebook, on the Guardian, even over Guardian articles warning about climate change. There they are, the car companies, rubbing our faces in the pollution they're causing - because they get to advertise all the time and the counter-narrative gets almost no air-time.

And this needs to stop as well, because it's no different to tobacco adverts during the 1970s, actually it's worse because these products are a threat to the whole planet, not primarily the individuals who smoke. Deglamourise those tail-pipes and the incessant urban noise that the fossil fuel industry has immersed us in. End those adverts, it'll make it easier to end fossil fuel car production.
Posted by Snial at 00:36 No comments: