I'm Julian Skidmore, the developer of the DIY 8-bit computer FIGnition. Most of my career has been spent doing embedded software, and timeouts have become a major bugbear of mine.

As I see it, the typical timeout mechanisms used on pretty much every low-end embedded system I've seen are terrible and most people probably don't even realise they are, so let's swallow the red pill and embrace a new way of doing them.

On 8-bit and 16-bit embedded systems 16-bit jiffy clocks are often used, because we still want to economise on resources even in the 21st century. They typically have a 1KHz frequency (a millisecond timer) which means they wrap around every 64s, and this has to be carefully considered when calculating timeouts.

On ARMs and the arduino library and undoubtably many other systems, 32-bit jiffy clocks are often used which extends the range to 4096000 seconds, which is roughly 1.5 months; and so for long-running applications; wrap-around problems apply to them as well.


The Evolution Of Timeouts

Embedded programmers usually approach timeouts in a progressive way, from naive implementations to ones that make better use of system resources over time. A programmer might start off by implementing countdown timeouts in the polled part of the mainloop.

However, they then find out that the main loop isn't polled deterministically, so they move the countdowns to an interrupt routine, which does the same thing. 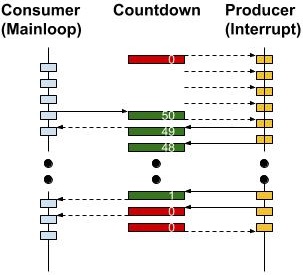 These forms of timeouts have two main strong points. Firstly, they're really simple to implement (just an assignment, a decrement, and a couple of if statements), and secondly, they have an indefinite polling window (the consumer can poll a 1ms countdown after an hour and it'll still report that it's complete). Unfortunately, they soak up CPU time for every countdown timer, even if the timer isn't running and they make it harder to write modular code (because you have to hardcode in the countdown to the interrupt, unless you use a data structure for your set of countdowns).

So, programmers then generally move onto timeouts based on simple comparisons. For example, they'll set the timeout expiry to the current time in milliseconds and then keep polling the milliseconds to see if it's passed the timeout:

The first timeout code is always constructed like this, because we see time as being linear. But of course it's buggy, because eventually millis() will get to its maximum, or near it, and when you add aPeriod, it wraps around to 0, so the first test for millis()>=gMyTimeout will think it's expired when it hasn't.

So, the programmer does the logical thing and incorporates the 'wrapping' issue into the algorithm by adding a flag to determine if the timeout wrapped around. Then we get something like:

GROT: The Golden Rules Of Timeouts

The First Golden Rule Of Timeouts is that for any circular jiffy time of n bits you always need at least n+1 bits of storage to maintain a timeout.

This rule is a direct consequence of the requirement we must have for timeouts, if a jiffy clock has a period of x before wrapping, then we need to be able to represent a time period of up to 2*x to determine a timeout:

This also means that because we have at least n+1 bits of storage for the timeout, we must perform at least n+1 bit arithmetic to calculate timeouts. Again, we can see that's true in both cases: in the first case we have some explicit code to extend the arithmetic by an extra bit and in the second case we must perform an initial subtraction (millis()-gMyTimeout) and then another subtraction will be performed for the comparison.

The second golden rule is this: timeouts must be computed as relative quantities if the jiffy clock wraps around. The primary reason why timeout calculations are buggy in the first case even when the extra bit is added, is because absolute comparisons are made instead of relative calculations. In the second algorithm, when we compute millis()-gMyTimeout, we actually compute a relative value. For example, when gMyTimeout is initially a high value, e.g. 0xff01, then when millis()==0, the calculation will be 0-0xff01 which is 0xfe, i.e. 254 milliseconds later.

Now the interesting thing about that calculation is that we're no longer strictly using unsigned arithmetic here, because 0 is much less than 0xff01 so the result is a negative number whose lower 16-bits result in a small positive number. So, what you have is a maths error, which happens to deliver the right results. In some (often older) architectures it's possible to trap on overflow; and this is what would happen here, a timeout would lead to a system error.

The observation that timeouts are relative leads neatly to this insight: timeouts should be signed, as should the jiffy clock.

It's counter-intuitive, but simply by defining, say the jiffy clock as:

Incrementing it in the timer tick routine (let's assume it's 1KHz):

Defining a timeout as:

And then to test for a timeout with:

Solves every problem we've found with timeouts so far; does it neatly and cleanly; and maximises the timeout period, in this case to n-1 bits, i.e. a range of 32s when the whole jiffy clock period will be 64s.

Why is it that the timeout calculation is expressed as millis()-gMyTimeout<0 instead of millis()<gMyTimeout when surely they're the same thing? In basic algebra we're taught that:

You simply subtract (or add) b at both sides to derive the equivalent equation. The answer is that it's only true on an infinite number line: for modulo arithmetic, both unsigned and signed, there are cases where they are not equivalent.

This is because when you take two quantities in the range 0..x and subtract one from the other, the total range of values you can get on an infinite number line is -x to x; and therefore if you can only represent x different values, then the same values must be re-used. This explains why, when you use unsigned values for timeouts, you get a large polling window if a is very low and b is really high, but as a gets higher, the polling window becomes increasingly squeezed.

It also explains why if we want to maximise the efficiency for timeouts, we should maximise (and standardise) the polling interval, and the way to do that is to limit the timeout range to maxTimeout=x/2, and then the range of results will be -x/2 to x/2.

The upshot is this: using signed timeouts is the cleanest solution out. It works, because when we subtract the current time from the timeout, we obtain the timeout relative to now: a positive number if it's in the future (it hasn't timed out) or a negative number if it's in the past (it has timed out). The window is the maximum theoretically possible, because given two arbitrary times, the only way to tell if a value has timed out is if you guarantee your timeouts and polling period are within half the maximum range, 180º of your data type.

There are many ways in which software engineers perform timeouts, but only signed timeouts are clean and efficient in storage, computation and code size. We should use them as standard.